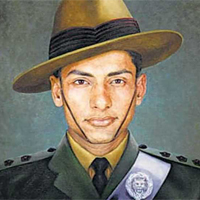 Our Ex-student ,Amar shaheed Captain Manoj Kumar Pandey,the son of Gopi Chand Pandey, was awarded the Param Vir Chakra, India’s highest medal for gallantry, posthumously, for his courage and leadership during adverse times in Kargil War.Manoj Kumar Pandey is considered a martyr for his sacrifice to the country. He remains as a role model to people everywhere and an inspiration to school students forever.